I can’t believe its been two weeks since my last post! Well, here I am 🙂 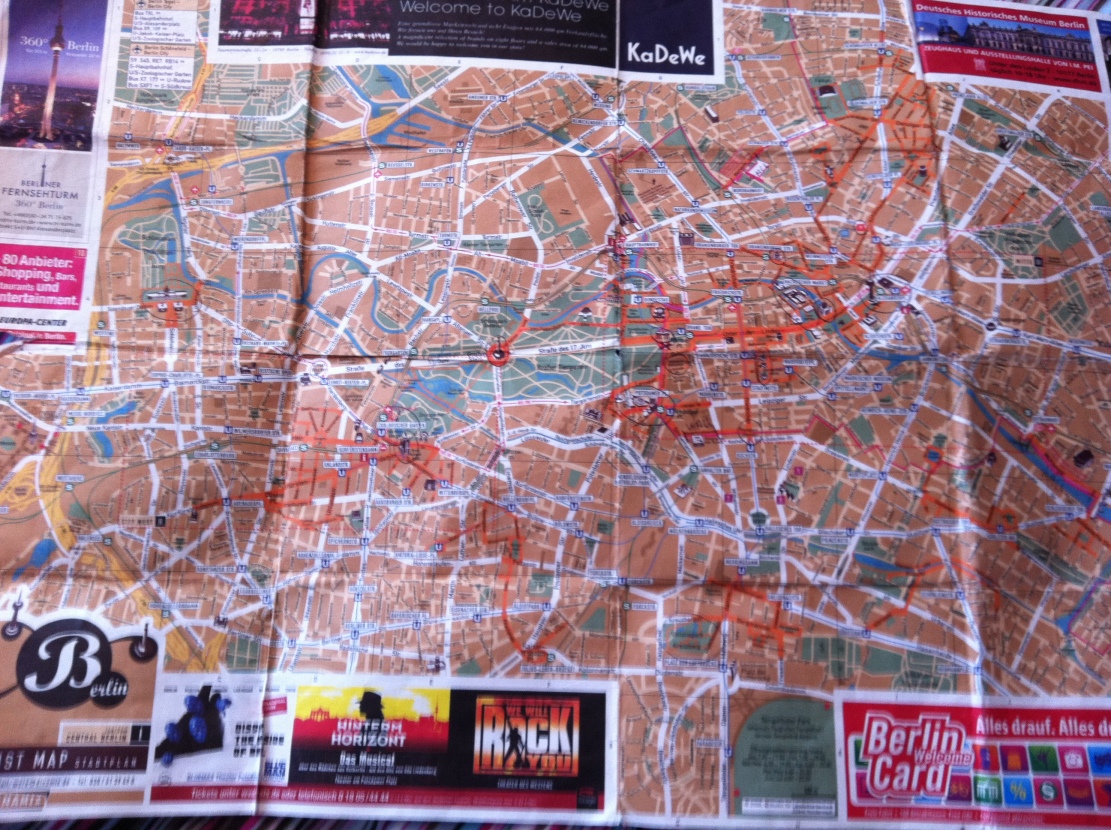 I’m just back from a week in Berlin – really loved it, so this post is about the things I saw and what I thought was interesting about the city :D.  Above is a map of Berlin.

I stayed at Hostel Aloha – a really nice place once you get past the front door (which is totally covered in graffiti and looks like the entrance to a squat).  This is their website where you can see some pictures: http://www.hostelaloha.com/.  Here’s their hostelbookers link which I booked them on – http://www.hostelbookers.com/hostels/germany/berlin/47193/ – if you go on to reviews you’ll notice that I’ve left one!

I’d definitely recommend this hostel to anyone who’s going to Berlin.  The hostel is friendly and I felt very comfortable there; they have some nice features such as a projector screen in the communal room and a big selection of movies.  They have no curfew, 24hr hot showers, a kitchen you can use, nice clean beds etc.  On our floor we had a ping-pong room which was nice too.

This was a sign above the toilet in our bathroom! hehehehe.  (Notice how the bad guy has his cap on backwards. Naughty).

Things to go and see

On the first day I went to see whats left of the Berlin wall, or the ‘East Side Gallery’ as it’s now called.  Approximately 106 paintings by artists from all over the world cover this memorial for freedom and make it the largest open air gallery in the world. 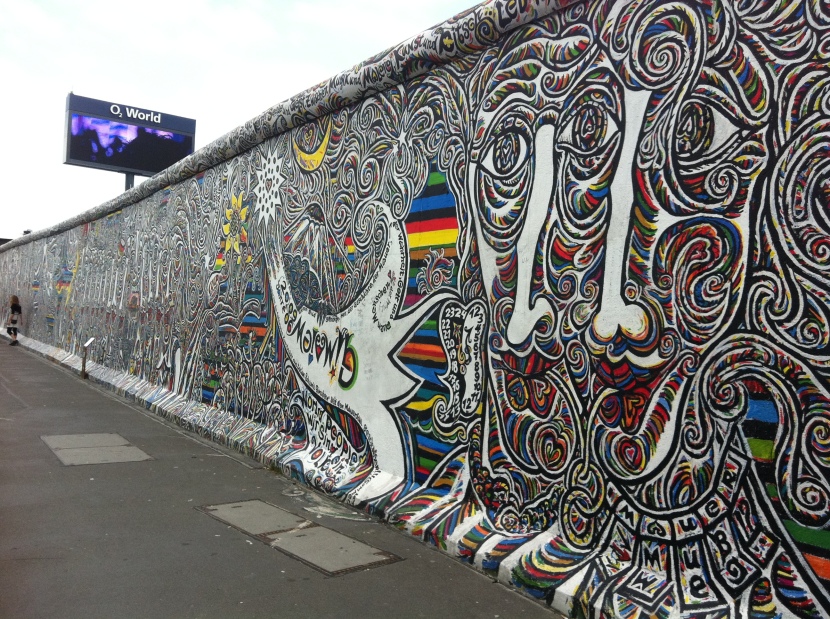 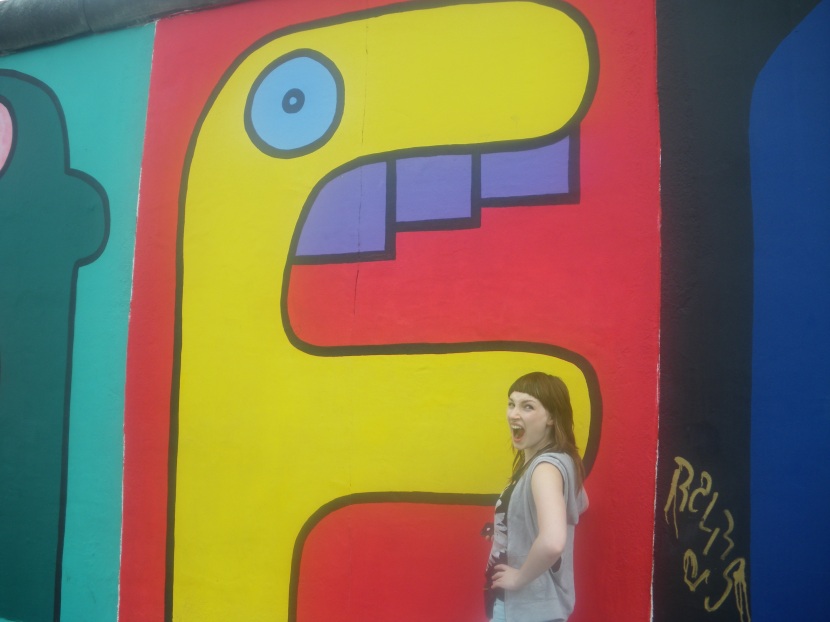 This must-do – it’s not your typical, boring, lets-go-and-see-the-touristy-crap tour.  This walking tour (which is FREE btw!) is all about getting a look at the ‘real’ Berlin and going to see things that no other tour will bring you to.

The tour leaves everyday at 11am and 1pm from the Starbucks at Alexander Platz which is a big train station.

The company, Alternative Berlin host a selection of other ‘alternative experiences’ including the Street Art Workshop and the Alternative Pub Crawl.   But we’ll  get to that after :D.  Click on the link above and take a look at their website.

So what did I see on this tour… 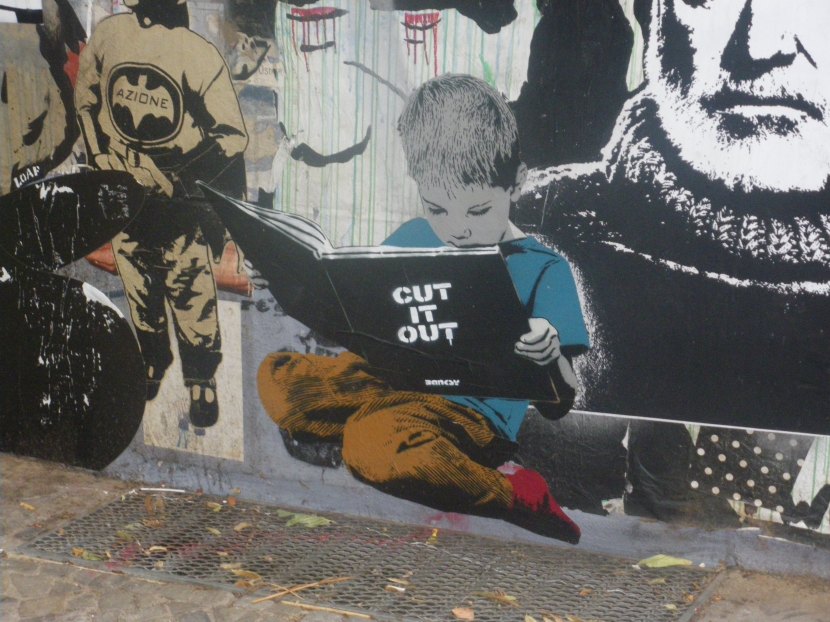 Wee bitta BANKSY for ya 😉

This piece of street art and the next few below are situated in an old bombed out train depot.  Berlin is quite poor and the government often doesn’t have the money to renovate buildings that are run down.  So, rather than just letting it sit and rot, the people of Berlin have covered the area in street art and opened up various things such as an indoor skate park, indoor rock climbing, clubs and artist space.  The train depot has a lively, underground vibe and  it was one of my favourite places on the tour.  Below are more pictures from this area: 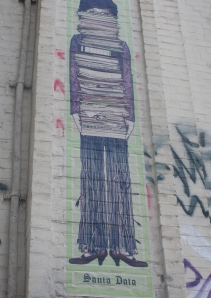 This street artist has created ‘new Saints’ for Berlin :).

Absolutely love this one!  The artist must have plastered the entire wall and then scraped away to reveal the brick.  Very innovative 🙂 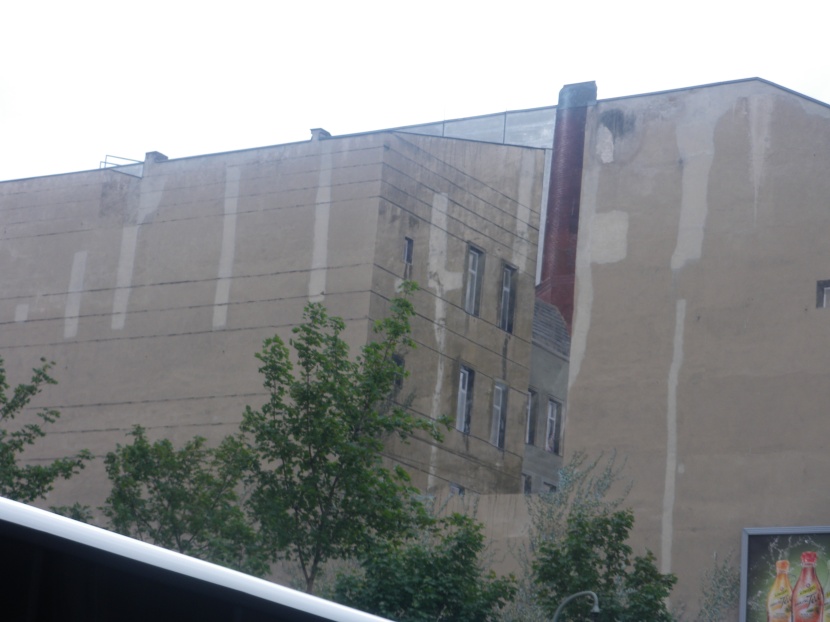 Just looks like a building right?  the windows etc are actually painted on!  This one was taken in the Turkish Quarter in Berlin – Berlin has the largest Turkish population outside of Turkey itself. 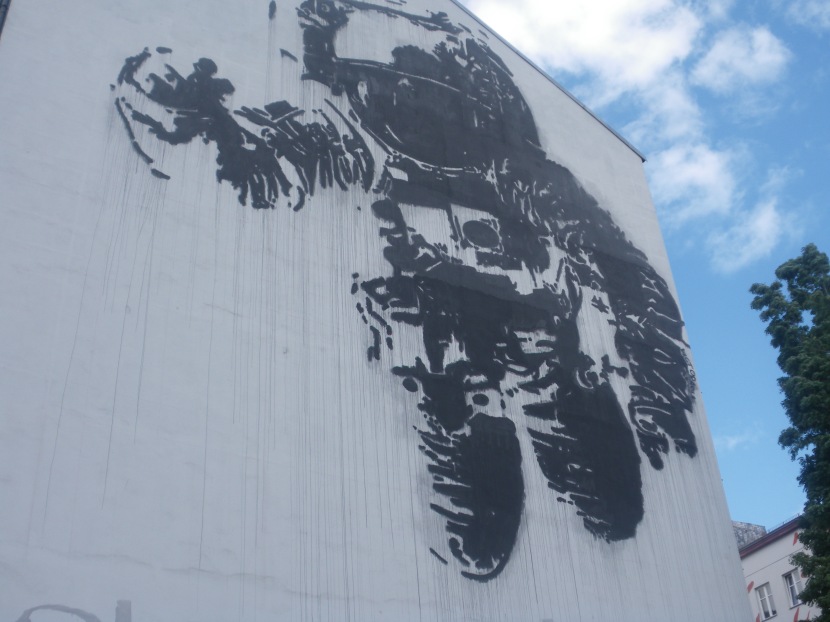 This is ‘the Astronaut’ by Victor Ash – one of the most famous pieces of street art in Berlin.  On its own it’s really good – however you can only see it in its true glory in the night-time.  Opposite the wall that this is painted on , there’s a car shop which has big flags on the roof.  In the night the street lights shine on the flags, creating a shadow on the wall – so it looks like the astronaut is holding a flag!  Genius? I think so. 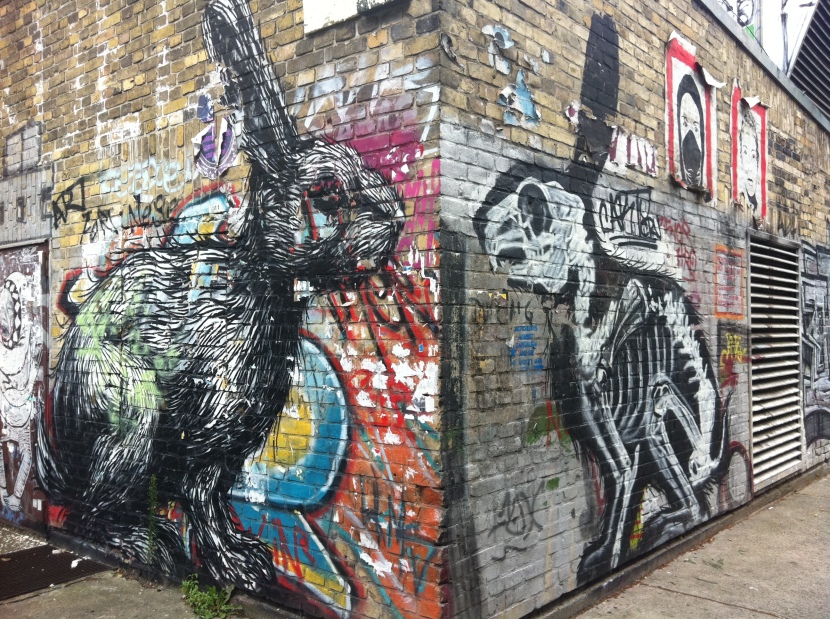 This is around where the building of the old bohemian hospital is – a building which housed over 2500 squatters during the eighties!  The rabbits are by a graffiti artist called ROA.  I like the way the hair on the left rabbit looks like brushstrokes, as its done using a spray can.

Some random but interesting places

This is a tree house which a man and his family from Turkey live in :).  It took him a long time to be allowed to stay there, when the Berlin wall was still up the space used to be a no mans land used as a rubbish tip.  So this guy realised that nobody owned the land and started to build a house out of all the crap that people were dumping.  The Government on the East side of the wall decided it was ok and he could stay on the land. But then the wall came down and he wasn’t protected by that government anymore as it didn’t exist.  The new government  wanted him off the land.  But all the people of Berlin protested and the Church pulled up some documents from a few centuries ago declaring the land was theirs and that he could stay in his little treehouse with his fam :D.  Yay for Turkish guy and his cute treehouse!

Above is a picture of community garden project, quite near to the graffiti of the two rabbits.  I thought this was really cool, people pay a little bit of money for a square metre of land for the year and everyone chips in to grow veggies and flowers etc. 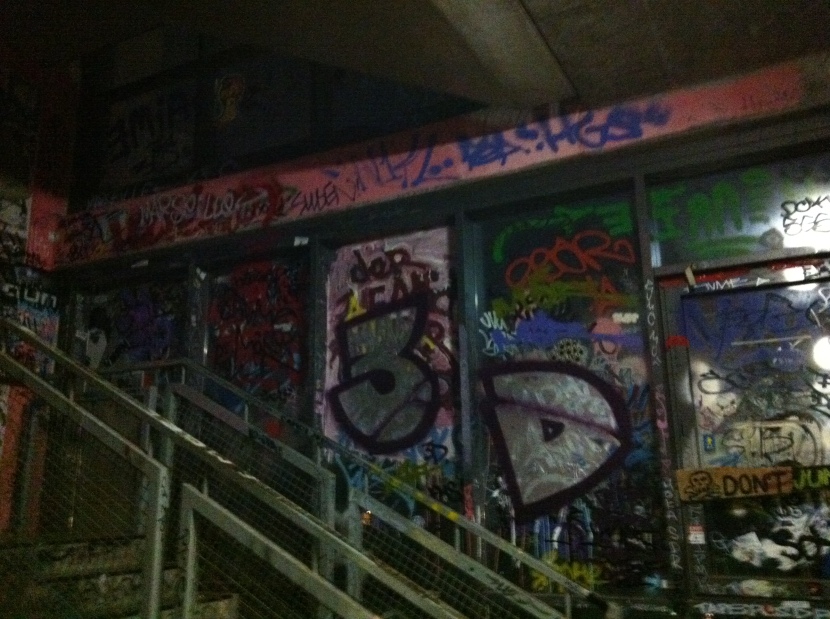 While on the tour you might go to see TACHLES – a bombed out artist squat building.  This place is really interesting, we didn’t go there on the tour but visited it anyway.  Take a wee look at these videos to get a feel of what it’s like: http://www.youtube.com/watch?v=b6SCqO7G6U0&feature=related,  http://www.youtube.com/watch?v=yGWPeuwB1vY&feature=related.

This wasn’t part of the tour but I recommend you go to see it if you have time!  There were a lot of quirky shops in the area Hostel Aloha was in.  My favourite was this shop: 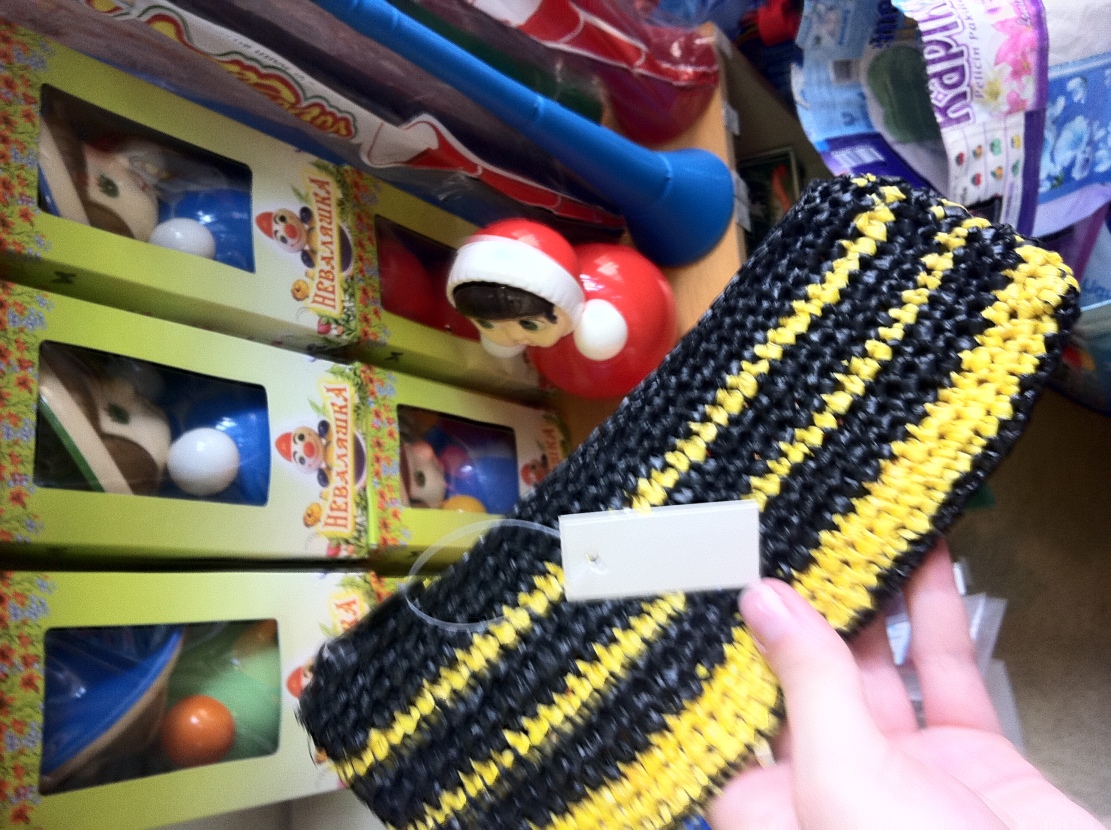 a makeup bag/pencil-case knitted from strips of plastic bags!

On the last day we tried to go and see the ‘touristy’ sites.  There’s another free tour that shows you all that kinda stuff but unfortunately it was booked up by the time we got there.  So we just ended up going to the Jewish Memorial, dedicated to the many souls lost in Berlin during the Holocaust.

As I had said at the top of the post, the ALTERNATIVE BERLIN company also does a pub crawl.  I really enjoyed it and I would deffo recommend doing it.  It starts of at a bar called ‘yesterday’  which is really cute, it has little toadstools and flowers coming out of the ceiling.

It’s €10 which includes free entry to about 6 bars and free shots in some of the bars.  I think it’s also a really good way to meet other tourists/travellers :).

Here are some pictures from my night!: 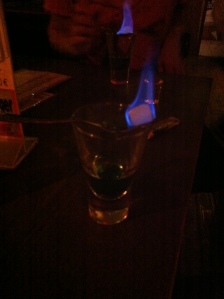 The ping-pong bar was great craic.  You get a pint and a deposit on a ping-pong bat for €5 (you get €2 back when you leave back the bat).  Everyone in the bar stands round the table and you take your turn hitting the ball – if you miss the ball you sit down and it whittles down to two people :D.  Here’s a video so you get the jist: http://www.youtube.com/watch?v=K3VLcB4cb3E&feature=related. 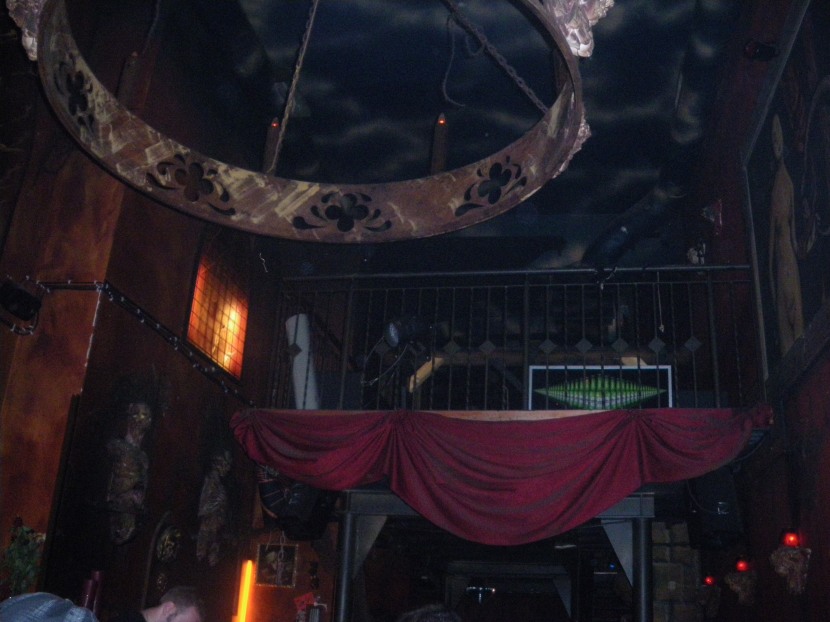 I gotta say, goth/rock/horror isn’t usually my thing, but this place was good fun!  Apparently Marilyn Manson comes here..I can see why haha.

The beer taps and the entrance to the girls bathroom!

Just me havin’ a geg.

After that I forgot to take anymore pictures! It had a great night though – definitely go on this Pubcrawl!

SOME THINGS ABOUT BERLIN

That’s all folks!  If you haven’t been already, go to Berlin and see some of this stuff for yourselves! 😀
Any questions about the stuff I mentioned in this post don’t hesitate to ask! email me on thebelfashblog@gmail.com or just post to my facebook page 🙂 – BELFASH BLOGPOST.
Nuala xo

A Belfastian studying in Newcastle-upon-Tyne.

I've had a year off from blogging but firing it up again as I've missed it a lot!